A brilliant sketch by Rowan Atkinson parodying New Archbishop of Canterbury, during Comic Relief. There have been 2,200 complaints, three quarters concerned with language. Though arsing about and shagging I would not consider offensive words pre watershed. The remainder of complaints were making the C of E look like well meaning buffoons trying to use popular culture to get with it.

Doubt complaints will be upheld for that. With over £75 million raised this was not just a good night for comedy.

UPDATE: comic relief have had clip pulled for copyright infringement – yet BBC iPlayer have taken away legal means to watch due to complaints.

Have put up another youtube link. Watch till they pull again.

I suppose you could always love your neighbour instead … 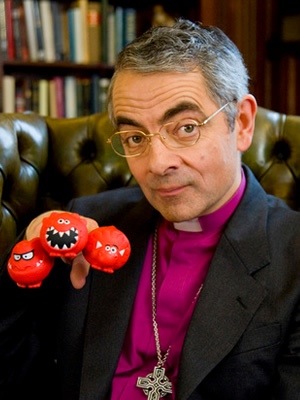