Yes you read that title right, based on the tweet Richard Dawkins sent out: 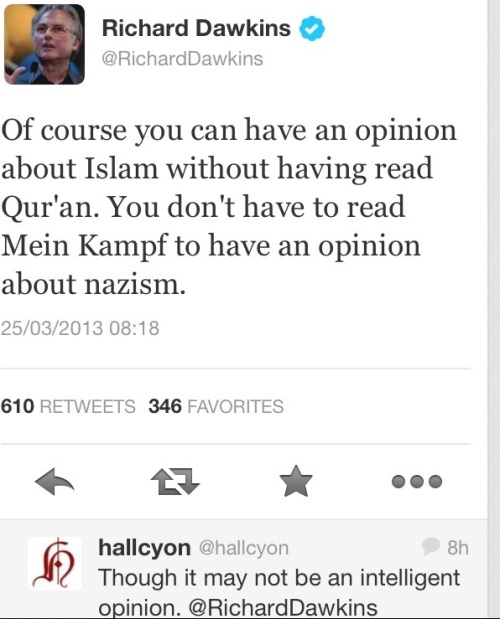 You can have several views of this – and indeed any combination of the following: islamophobic use of simile, Godwin’s Law in action, free publicity this will generate, no empathy for how people will react to what he says.

Dawkins has straight away tried to deal with the first in a subsequent tweet: 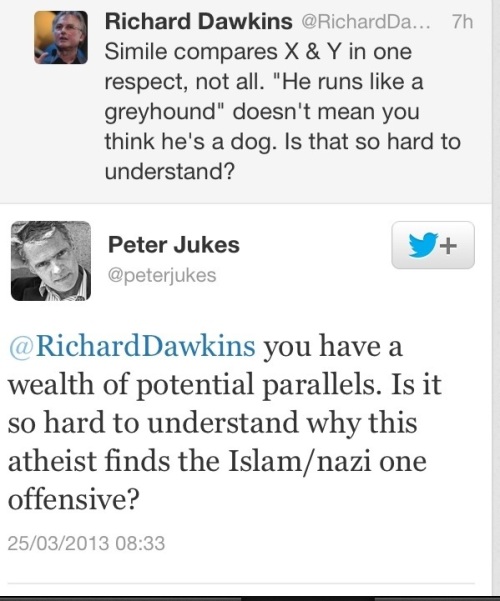 Godwin’s Law is that in an online argument given enough time a person will invoke Hitler/nazis on their opponent or on their idea. Also a rather cheap mud slinging shot in a debate.

Having read a pre-war edition of Mein Kampf and having an Uncle arrested at a war time press conference for holding his copy up when they quoted the book saying “which page please?” some reasons you may want to read to understand Hitler and the nazis. My Uncle was part of an anti-propaganda group determined truth should not be the first casualty of war. Read the original source material – how can I suggest that to creationists when Dawkins suggests not necessary for religion? Expect that one to be thrown back in evolution/intelligent design discussion.

Free publicity suggests Dawkins as the media savvy person that felt Krauss should have walked out of a gender allocated seating arrangement debate to generate maximum publicity. Being controversial will cause column inches to be written, with publicity for Dawkins’ issues, himself and works.

The last point of no empathy is for me the one that strikes home. Long time readers will know of Rabbi Boteach of whom Dawkins said “you shriek like Hitler”. It took much correspondence and comments before Richard readily acknowledged not a good move; let alone a hurtful comparison to make.

The simile tweet suggests Dawkins has not learnt from that experience. I have met Muslims that would readily have my back at a gay rights march (sic), stand up for secularism and let humanism override literal interpretation of the Koran. To my mind we need to embolden and support such thinkers in the Muslim community as well as safeguard apostates and human rights for those wanting to leave. This is a global issue.

I read an excellent blog defending Dawkins from the charge of Islamophobia. A lack of empathy regarding comparison is more the case given track record with Boteach.

In conclusion the historian would suggest reading original source material is a very good idea. The publicist that saying Koran and Mein Kampf in same sentence will generate a media frenzy. The Humanist that this is not helping us get on with the human rights issues we need to face down within Islam.

The secular activist in me is above all saying – good grief here we go again.

UPDATE Blog: Translation (why reading Mein Kampf may have made a difference)

6 responses to “Richard Dawkins, the Koran and Mein Kampf”