The LGBTIQ Greens Do Not Support Peter Tatchell

In the one corner Fran Cowell of the National Union of Students (NUS) made accusations of Peter Tatchell being racist and transphobic, in justifying him being withdrawn from a debate so she would be willing to take part. You might think The Green Party LGBTIQ might support their own party member, for the commited activism on gay rights and equality for all Tatchell has done.

At first they tried to sit on the fence. 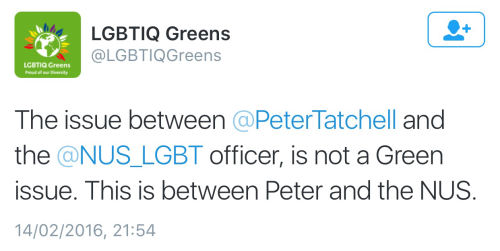 But then The Young Greens issued a statement in support of Fran Cowell. Instead of dealing with her outlandish and ignorant claims against Tatchell, they claimed this was actually all an attack on the NUS and its officers:

The Young Greens offer their support to NUS LGBT Officer, Fran Cowling, who joins a line of NUS liberation officers who have been the target of oppression in recent years.
With people crying out that it is an affront on free speech, the Young Greens wish to state that while we support the right to free speech, we do not believe that this means those such as Fran have to listen to things they find oppressive. Fran has every right to consider who they share a platform with, and we believe the attacks are unjustified. The Young Greens stand in solidarity with Fran in their actions and condemn those who have abused them and other NUS Liberation officers.

As a party we have a strong history of standing up for equality, more details of which can be seen in our LGBTIQA manifesto. The Young Greens’ own liberation officers have rallied behind the NUS officers.

Co-Chair of Young Greens LGBTIQA, Molly Arthurs said: “Fran Cowling is not silencing Peter Tatchell; they are not stopping him from speaking, just refusing to share a platform with someone that they feel morally at odds with. I think it is important to support Fran in their decision and recognise that they are a student and should not be subject to torrents of abuse from those who disagree with them. It is disappointing that once again a debate about freedom of speech has meant that we as LGBTIQA people are forced to listen to share platforms with those we find problematic face further abuse for so-called censorship.”

Amber Moya Goneni and Oliver Millward, Co-Chairs of Young Greens People of Colour have stated that they “stand proudly in solidarity with Fran, Malia, Maddy and all NUS national liberation officers, and celebrate their determination and hardiness in spite of the barrier of abuse.”

Notice how it does not consider Cowling’s branding of Tatchell, as a racist and transphobic, as an attack. This is changed to “morally at odds with” Peter Tatchell who is described as problematic and “oppressive” in what he has to say. Those that have an issue with such baseless character assassination are ignored. It is how Fran feels, respect her right to say and do as she pleases. She is just a student. Give her a safe space to say what she feels without worrying how defamatory it is and do not think to use free speech to challenge her views.

Maybe the LGBTIQ Greens would at least mention that while Fran is entitled to debate whoever she wants, Peter’s commitment and activism on human rights for all was not in question.

LGBTIQ Greens fully support the Young Greens’ statement. We believe that anyone should have the option to not attend an event if they wish. We also believe that the bullying and harrassment that Fran has been subjected to is utterly appaling and out of order. No one should be a victim of this.

No issue with falsely calling someone a racist and a transphobic. That is not abuse. Demanding he be pulled from a debate or you will not attend, is not bullying to get your way. Instead, when people call you on it you get to be the victim needing solidarity!

If this is what “determination and hardiness” is, then students that depend on the NUS might do well to follow the example of someone that has shown those qualities.

Peter Tatchell; might be worth listening to him to learn how.

7 responses to “The LGBTIQ Greens Do Not Support Peter Tatchell”