Bianca Jagger’s tweet on MPs that voted for Iraq War

Bianca Jagger, chief executive of a human rights foundation, invites us to read this list of MPs carefully. Doing so reveals MPs described as:

“Negro. Served in the Blair Cabinet”

“His stepfather, Ronald Davis was Jewish. Previously the chairman of the party.”

People rushed to point out the hatred, bigotry, antisemitism the list contained, and what on earth she was thinking sharing it?

Hours after posting came her apology. 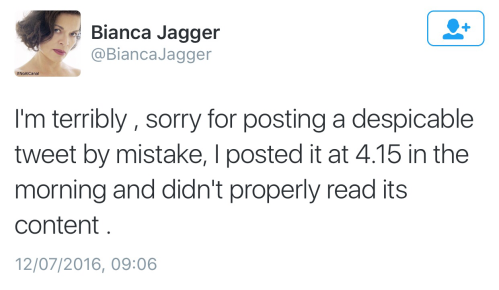 Having urged us to “please read it carefully” she states she “didn’t properly read its content.”

The point of sharing such lists is to stir up hatred against Labour MPs. The problem for Jagger, is the hatred was too openly there for all to see.

Remember, Labour apparently does not have an antisemitic problem associated with Corbyn’s leadership. Depending on how carefully you read these things.