The England Squad for the World Cup, ranked 6th in the world, came third. It is the best result by a football squad since 1966. The Lionesses have done us proud. The backstory for many of them have been inspirational. Fara Williams, who was homeless for six years, but still pursued her goal to be a professional footballer. Katie Chapman who was dropped by the FA because she wanted time off to look after her children, but did not let them stop her. Casey Stoney as captain coming out as gay. Among the ranks: lawyers, business owners – professionals on the field of play and off.

The official England twitter account did not reflect that at all when they prepared to go back home. 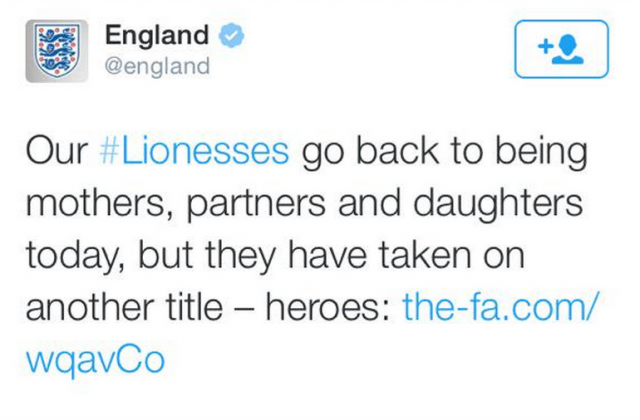 A patronising, sexist and undermining tweet or a reflection that after fifty days intensive coaching, training and playing they would be reunited with loved ones?  Twitter has been full of derision mostly reacting to the tweet as the former, and the tweet was deleted. However, I wanted to focus on one exchange which caught my eye.

Ricky Block (name a giveaway for a troll account) was called out for their language and views:

Achievements are to be celebrated, heroes are to be congratulated, loud mouth bullies taken down. No doubt the team will enjoy spending more time with their loved ones now the tournament is over. Just take care how you tweet these things, without being patronising at best, sexist at worst.

Perhaps one day we will win the world cup.

Maybe when we do, it will matter that it is England – not whether it was the men or the women.

A Love Letter to Scotland For The Union

My first experience of Scotland was a Haggis hunt with the fuzzbuzzes. To the uninitiated, the fuzzbuzzes were created as stories to help children with phonetic sound and reading issues. I will forever be grateful that while at infant school I was singled out for special funding. The extra tuition included using these story books, while taught one to one. Without this support, I doubt I would be able to read, let alone blog.

One slight draw back – I really did think Haggis was a two legged creature that was hunted in the Glen. I can quite understand people of Scotland feeling that the English are similarly naive about their desires and wants for an Independent Scotland.

I have no say over your future. Rightly so. The decision is for Scotland alone. All I can tell you is that my love for Scotland started when my love for reading was kindled as a little boy in Hampshire.

Finding out Haggis really did not have legs, was an offal experience. However, it led me to the poetry of Robert Burns. The different sound of the Scottish dialect when reading aloud the poems. There was a joy in the language. Also, that my birthday is the day before Burns Night. It fired my imagination – and my love for Scotland went from a fictionalised world to the real one.

At sixth form studying economics there was a chance to meet another Scottish hero. One, unlike Burns, that believed wholeheartedly in the Union. Adam Smith – the father of economics and moral philosopher. I combined those two elements by reading Economics and Politics at University. Which taught me among other things:

At university I discovered David Hume, and the significance of the Scottish Enlightenment and the English Enlightenment to the United Kingdom and beyond. Never was synergy in thought more apparent in the day to day actions of human activity. The reverberations are still felt around the world.

Skip forward to now, and what the United Kingdom does still impacts on the world. In a globalised community, perhaps there has never been a better time to go it alone. The British Empire is rightly no more.

Yet a world with more borders, where common bonds of humanity are broken down, should give pause to think again. Fellow citizens becoming neighbours. Neighbours becoming competitors. Kin becoming strangers. A shared heritage becoming estranged.

Going to back to Junior school I remember a simulation about protecting Osprey on the old Acorn computers (showing my age now). Using funds in such a way to maximise the number born.

Nearly thirty years later they are still an Amber List species due both to low breeding numbers and illegal killings. This fishing bird of prey truly is an awesome sight to behold in action. It inspired this poem by Jeremy Wyatt:

If you wanted to understand why we need no more borders – poetry and birds never should have barriers – read his description how he came to write the poem:

Written two years ago after a dreamy day at Threave Castle viewing a Welsh osprey who moved to Scotland (via Africa) [Source: Poem called “Osprey Flight”]

There are no borders for a flying bird of prey. The land is one. Such lines are a human invention, a tribal longing for terroritry, to allow distinctions. To make narrower ties at the expense of making others forlorn strangers. Nationalism is glorified as a patriotic form of sectarianism.

We have shared an identity, our heritage and way of life for so long. That is what is at stake tomorrow. I hope that we can work together to make this island better for us all. Rather than start to look at each other as foreigners, and prevent other children growing up to care and love each other.

Possibly overshadowed by the deportation of Abu Qatada, another person hit the headlines, one Abdul Qadir Jilani.

Mr Jilani, who is based in Walthamstow, east London, said in the offending [DM Digital] programme: “The matter of insulting the prophet does not fall in the category of terrorism.

“Those who cannot kill such men have no faith.

“It is your duty, the duty of those who recite the holy verse, to kill those who insult Prophet Mohammed.

“Under the guidance from Islamic texts it is evident that if a Muslim apostatises, then it is not right to wait for the authorised courts; anyone may kill him.

“An apostate deserves to be killed and any man may kill him.”[Daily Telegraph]

Incitement to kill, not just hatred. The public good threatened via our airwaves. A clear breach of free speech. So we can expect he is under arrest, not least as a clear signal that EU guidelines will be upheld on freedom of religion and belief.

Excuse me? Let me get this straight: a tweet joke about an airport being closed due to snow had better be sorted out or they will bomb it produces a court case, but someone that incites muslims to kill those that have left the Islamic faith is still at liberty in London.

Dr Malik the chief executive of DM Digital explains why even just the fine was going too far for him:

Dr Malik said that he was dissatisfied with Ofcom’s ruling because there were cultural differences that Ofcom does not understand. He said that the regulator’s adjudicating committee should have members picked from the Muslim community.[Source]

This is no defence – it is a clear breach of universal human rights that people may chose their own faith, and change it, without fear or coercion.

Home Secretary will you kindly now ask the Crown Prosecution Service to examine this with a view to prosecution. Uphold our human rights and treaty obligations not to have our ex Muslim citizens murdered for supposed cultural and religious reasons, or threatened with.