If you are new to the curious world of Mo Ansar you may want to read this post first for more context, though not essential.

The Mo Ansar vanity exercise goes on via Twitter, though now his persona is fighting for islamic orthodoxy, or more specifically for only those that fit a certain criteria for having anything worth saying about reform. Especially after he smears them. 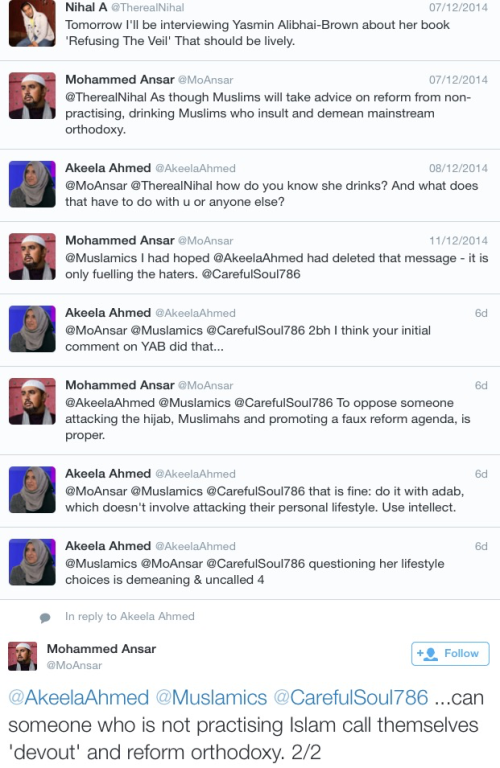 The man that most fits this criteria is, of course, himself. Readily available for media engagements day and night. Those regular slots on TV have dried up since the exposes on him hit mainstream media.

Secular progressives and ISIS sit at both extremes. They share efforts to create schism/faux-reform, by twisting Islam to suit themselves.

Anjem represents Muslims as much as Maajid Nawaz does – that is to say, not at all. Both extremists rejected by mainstream Muslim society.

Such has been his hatred of the Quilliam counter extremism think tank founded by Maajid Nawaz, comparing them to Anjem Choudary and ISIS. In recent months his anger has included TellMama, the counter anti-muslim bigotry organisation which dismissed his complaint against broadcaster Iain Dale (as did the police) over a Twitter exchange they had. Today all this spilled out on Twitter, as TellMama lost patience with him:

Mo Ansar tweeted (but has deleted while I wrote this piece) that he helped TellMama to grow and that they broke their promise to help with his accusation against Iain Dale.

[Update: someone else (thanks Nick!) took a screenshot here is that tweet: 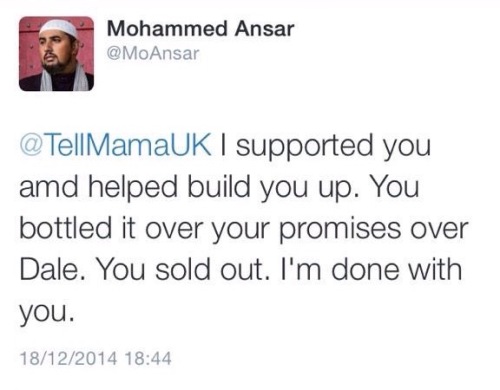 Mo Ansar’s claims to speak as a lawyer, and representing himself in court, have been repeatedly questioned. 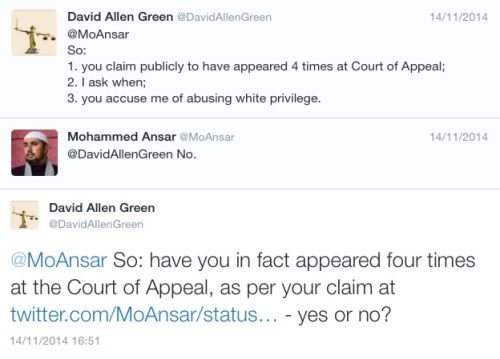 David never got a direct answer, and this is the tweet he links to:

Interestingly Mo Ansar’s apology tweet, for having given any impression of being a lawyer, has been deleted.

What Mo Ansar has done though is accuse David Allen Green of harassment for asking Mo to substantiate tweets he has publicly made:

@DavidAllenGreen You are blocked. You know this. I'll ask you once, just once, please stop harassing me.

And that this has made him a victim:

@BelindaBG I hope Mr Green can move on. He's been blocked for causing annoyance, inconvenience and needless anxiety.

Thing is Ansar’s claims regarding himself are fair comment. For example that he was top of an Al Shabab kill list: 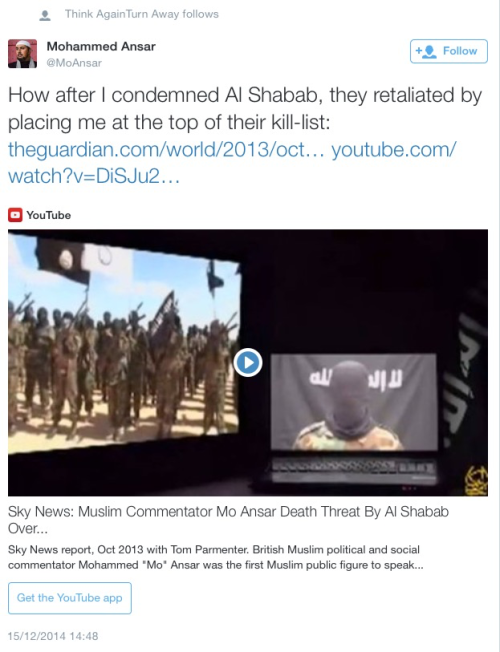 Yet Mo Shafiq has confirmed the police and security services informed him the threat to them all (including Maajid Nawaz and others) was real, but not drawn up in this way:

The reason this keeps dragging on is because Mo Ansar keeps drawing attention to these things, without providing any credible evidence. Mentioning yet again he was top of a death list.

After my condemnation of the Woolwich killing, Al Shabab put me on top of their kill list http://t.co/K7w12Apn86 https://t.co/m4d1MNNEQl 1/2

@terrychristian I live at the top of the Al Shabab hit list. For condemning hate, terrorism and for promoting peace http://t.co/6BI0jiShv3

@astronomeradam Brilliant. I've had attacks from the far right, put at the top of the Al Shabab kill list, but you – you're the best.

In other news, for speaking out against terror and extremism, I was named number one on the Al Shabab most wanted kill-list. Nice. #MoReview

Why would anyone want to single themselves out so belittling the threat to others? What sort of person crows publicly about being top of a death list, but complains bitterly about tweets as harassment when the police see no issue? Who phones employers demanding they sack someone for sending a tweet?

@sanjeedah As its in the hands of the police now, suggest you don't take action that may be considered a call for your friends to harass me.

@sanjeedah So you know, I will be reporting you to the local constabulary under the malicious communications act. Expect a summons.

Yes calling someone a cunt on Twitter is worthy of a police investigation then going before the courts. Except of course, it was not in the end.

Now what is Mo Ansar’s problem?

@MoAnsar @steveplrose: worked for years to build us up! Mo You really are a fantasist. Truly a fantasist, who puts vexatious claims in

However, let me leave the final word to Mo Ansar who despite smearing, petty tactics and wasting police time gives some sage advice he would do well to follow.

So @MoAnsar has sent a threatening email to my workplace because I have asked him about his public claims to be a lawyer. Extraordinary.