Tim Farron had to go as leader of the Liberal Democrats. There are real concerns that the Conservative deal with the Northern Ireland DUP to be a minority government would mean social policy against gay rights and women’s rights being more likely from Theresa May in this parliament.

Some of Tim Farron’s past statements:

“Abortion is wrong. Society has to climb down from the position that says there is nothing morally objectionable about abortion before a certain time. If abortion is wrong it is wrong at any time.”

“Christianity, I am convinced, is not ‘a bit’ true. It is either not true, or it is so compellingly utterly true, that almost nothing else matters … There is no middle way.”

His Christian conviction led to him supporting faith healing claims without needing evidence, demanding the advertising agency allow as “God can heal people from medical conditions.” Usually, the burden of proof is on those claiming to perform miracles. (More on the above can be read here).

It was not enough to convince people that he was the right man for the job to promote liberal values when they are in serious threat from a minority Conservative government supported by a fundamentalist protestant party.

Lord Paddick, a former senior Met police officer, had resigned as Home Affairs spokesman. For the record, Lord Paddick is gay and a Christian in a same sex marriage for last eight years. Tim Farron’s views on gay sex during the current campaign had not convinced him to stay on.

“There are Christians in politics who take the view that they should impose the tenets of faith on society, but I have not taken that approach because I disagree with it – it’s not liberal and it is counterproductive when it comes to advancing the gospel.

Even so, I seem to be the subject of suspicion because of what I believe and who my faith is in.”

We want to count on someone being whole hearted against the fundementalists not someone that wants to be in that number, when the Orange Men come marching in. If your Christianity is at one with the DUP, do not be surprised if you end up being drummed out of the Liberal Democrat party.

I saw Farron as being a clear break from the coalition government of 2010. I hoped his secularism would mean he could show his liberal finger tips. The problem was he made a fist of it, as he admits. With over 80% of the vote going to the two main parties, and barely getting into double figures in the Commons, his position was untenable.

Tim Farron suggesting he has been crucified for his Christian faith, is how he can forgive his own sins while leading the Liberal Democrats. After the 2015 General Election there was to be no resurrection this time. Perhaps more a stone has been rolled away.

Whether anyone comes out of the tomb now to lead the liberal democrats to paradise, is another matter that can now begin.

Some have been stating that Farron’s voting record on gay rights has shown, whatever his beliefs, his secularism meant he always promoted their rights. Here that issue is put to bed: it was not as consistent as one would hope for someone promoting gay rights as an MP. I too had a discussion with Farron a few years back about his past voting record, and he admited “I have since then to show through deeds too.” 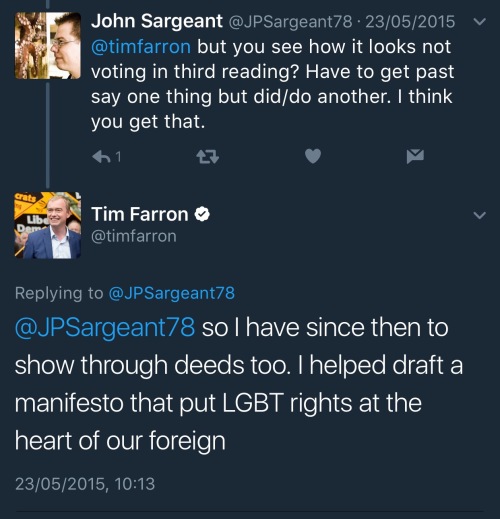 You can not be a liberal party leader holding views that question homosexuality, no matter how much you claim your religious anti-gay sentiments do not cloud your activism for gay rights. This election was a chance to put right. There were two years to think about, and resolve how to communicate to soothe such concerns. When Theresa May and Michael Gove appear more pro gay then you saying gay sex is not a sin …

Liberalism tolerates different views. A liberal leader though has to be on the right side of those views in order to challenge how people act and think about people who are oppressed and vilified, for a liberal society to flourish.